skip to main | skip to sidebar

Build Your Own University

Laurie Fendrich muses on the composition of Brainstorm: Fendrich University . If you were to create your own university from the ground up, what would it look like?
Posted by Laura at 1:11 PM No comments:

Fascinating discussion on the future of HE in our state. These are loose thoughts that will be developed further later.

Can we truly have a one-system network of colleges? Can we tear down the silos? If so, how will we do it? Espeically afater ew've been pitted against each other for over 100 years (or even decades)?

Self-paced and service learning? but what about engagement?

is education a right or a privilege?

Self-paced learning is NOT necessarily equivalent with online learning. IT'S JUST NOT, even with its asynchronous. where does this misinformation come from?

How can we get the message out that YES, YOU are college material? And how to we assist in their learning once they get here?

My brother was able to get these pictures of an albino deer near his house in southern Virginia. 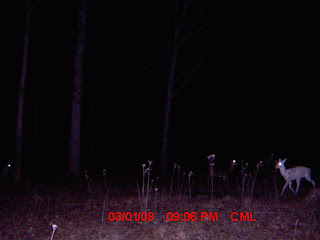 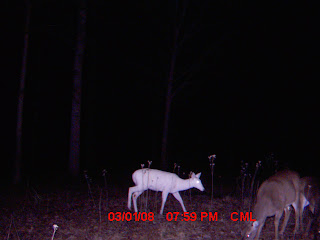 Note the normal colored deer next to her for contrast. 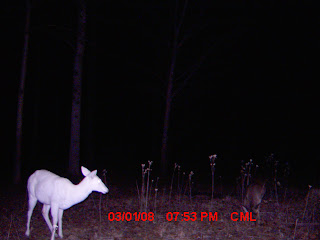 On this one you can see the pink eyes.
Posted by Laura at 7:11 AM 3 comments:

Creating the BEST Online Course Ever

Online courses: how to encourage interactivity with new (often cheap or free ) tools.

The approach they're taking is that they are addressing problems with the technology, not finding a problem for the tech. to address. That's an important distinction.

Hey, here's a concept: poll your online students to see what kind of access they have!! 85% have high speed access in home. We could use SurveyMonkey for this.....I should encourage the online instructors to do this.

Tutorials for Just in Time learning about embedding YouTube, etc. I really need to start using CamTasia ($299) or CamStudio (opensource and free)for that!! this is for screencapture with audio. Wink (also free) can do this, but the sound seems a bit muddy for me. You can add add callouts, have them click next, etc. On a plus, the Flash files are very small. And you can narrate after you record the screen capture.

LectureScribe (free from Clemson...go Tigers!) for caputuring whiteboard lectures with speech from a tablet or a SmartBoard or a Wacom Tablet.

There is a FREE PDF Maker at Sourceforge: missed the URL but I'll go back and get it later to add it in here.

They are also using HotPotatoes for creating quizzes and interactions. That's the tool that I have always meant to work with and never quite got to it. And I mean ever since grad school!

yet more accolades for google Docs. I just love it!!! And it seems mine is the majority opinion.

Low cost video conferencing: perhaps we should investigate this? Flash Meeting it's freee but you need to create a wiki account on their server. Coolness!!!!!
Posted by Laura at 6:47 AM 2 comments:

What the Chancelor said

Education the most important issue in attractiving new businesses: should tell that to the tax-cut folks!

INitiatives:
With great opportunities come great responsibility: we need to fulfill the trust that the state has given us. In shorty, we need to deliver.

Wouldn't' it be great if the need for this conference went away? When we are in the place where we recognize the important of technology as a given. I need to think about this a while to determine whether I agree.

Is it our job to keep/attract talent here? I think that goes with the career office. But, yes, I think that's part of our job.

Role of privates:
We MUST have an integrated tech. infra.
Systems thinking for ALL in the state.

Lots about STEM, but where's the focus on language? Heaven knows we need that too!!

GREAT QUESTION: there's a lot of sharing with HEd. What about K12?

How do we prepare K12 kids for college success? Especially in places like Cleveland and other sorely underfunded areas? Perhaps a bridge program? Education for K12 on what's necessary.

And, just as importantly, how do we trumpet what we've done??
Posted by Laura at 6:52 AM No comments:

What we learn from failure

I've always said I love to learn. But I've recently discovered that this is not always true.

I love to learn things I'm good at. If I'm not very good at learning them or doing them, I'm a much less enthusiastic learner. I've always loved to read and do academic work, partly because I was always good at it. But art? Music? Physical education? Forget it. I've had enough of being picked last for teams, thank you very much.

Case in point: yesterday was my racquetball game. About a year and a half ago, one of my favorite colleagues (who's roughly my dad's age) volunteered to teach me to play racquetball. I thought it would be a good thing for me to learn as a) I didn't know about it and b) I'm not very good at physical endeavors. This will have the effect of pushing me beyond my comfort level. See, I've always been quite uncoordinated. I'm not sure if it's my poor eyesight or some kind of miscommunication between my body and brain. Whatever it is, it's quite frustrating.

Anyway, after a year and a half of diligent practice you'd think I'd be better. And I am: a little. very little. In this time, I have beat him in exactly ONE match. We very seldom go to the third game in a match because he beats me for the first two games. Granted, usually we can get some good volleys going. Since we do it for the exercise and not for the competition, this is OK.

Except for yesterday. I have no idea what was or was not going on yesterday, but I could not hit a daggone thing. not even the broad side of a barn. and said barn was not in the racquetball court.

it was pretty obvious that I was getting frustrated. At one point my colleague jokingly said "You're cute when you're mad."

"You'd look 'cute' with a racquet sticking out of your ear, too," was my retort.

I'd love to tell you that I recovered and beat him, but the score was 2-15. And the two were on dumb luck.

Why? Well, because I was getting frustrated. Nothing was working right, and so I kept trying. But still, nothing worked. Then the negativism crept in. "I'm not going to do anything anyway, so I may as well just try to get this over as fast as I can," I thought.

Has anyone ever seen tests in which your students do that? They're doing OK, not great, but then they just disintegrate. You can almost see it on the test itself. What levels of frustration must they be experiencing? after yesterday's game, I think I can understand a little bit.

But the stakes for me are much lower. No grades or scholarships are resting on my racquetball game. No one has ever told me that if I don't get off my tail and start learning racquetball, I'd end up a bum on the street. For our students for whom learning doesn't come easily, this is a familiar occurrence.

So what do we do about it? I think that's a post for tomorrow. But for now, I'll keep the focus on my frustration and what it taught me about learning.
Posted by Laura at 3:35 PM 2 comments:

Expect to see a link to my de.li.cio.us tags and a new blogroll soon!
Posted by Laura at 6:28 AM No comments:

Why am I not surprised?

Laura
Marietta, Ohio, United States
When I'm not working, I enjoy reading. Right now I'm working on Flow and A Brief History of God . I just got Flow and am looking forward to reading it. You can check out what I'm reading on Goodreads. Oh, and I also enjoy puns...the worse, the better.